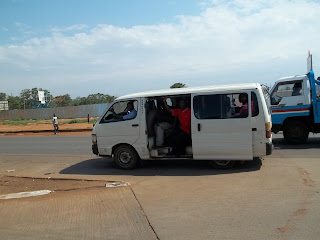 I was desperate. I hadn’t been to the project all week, and for some reason, I felt that the work could not be done without me being there. I know this was a purely fabricated image that was only in my mind. Still no petrol in the city, so the car was just sitting in the driveway adorning the scenery.
I decided to live dangerously for a day…a thought raced through my mind. I would take the public transportation system all the way to Msundwe. Now, I must for your sake try to put into words what I mean by public transportation. The best way to describe this system for us in the U.S. is to go back to the 1960’s. Remember the hippie movement, the VW mini busses with flowers painted all over the sides, ragged out almost and maybe not street legal? Well, take the flowers off the sides and remove all the safety features and restrictions placed on a vehicle to make it safe to drive and we can begin to see a picture forming. These busses are twelve passenger vans, modified. They have welded another single seat along the side of each seat making it impossible to go from one seat to another without climbing over.
Then, they cram five people into a seat made for 3. My seat on this ride happened to be the very last seat in the back with people pressing me on both sides. You can only imagine the smell that emanated from this van of people packed like sardines in a can. Just when I thought we couldn’t possibly hold another paper sack, we stopped and picked up two more.
These two bodies were piled in the cargo area laying down. You know the space behind the last seat? With arms hanging out every window ( thank God they did open), we were off for a 45 minute drive, uh, I mean experience. I am told these busses cause wrecks more than any other problem in this country. I now know that these rumors are probably true. I am not kidding! These busses filled with people look like they are going to tip over at any minute! They all seem to “lean” as they are traveling down the road.
On this day, I was taking about ten Bibles with me to hand out to the chiefs at the village. A sack sat in my lap (like where else could I put it?) Holding my cargo, I made a mistake by opening the sack and looking in. What made me do that? Didn’t I already know what was inside? The woman that was literally in my side, got a peek inside the sack. Immediately she held out her hand and in her broken English asked me for one. I am not sure she even knew what I was carrying. “What the heck?” I thought. I pulled one out and gave it to her. She thanked me and started saying things which I could not understand, but it must have been “Hey, look this white guy has gifts for us all!” for the people turned around and held out their hands as well. What could I do. Somewhere in Malawi there are a few people who received something extra on their bus ride! Who knows, maybe they will even read them.
This woman sitting next to me smiled and said that she wanted to be my friend. I smiled back and said that she already was. Then she asked if I had an extra watch as she pointed at mine. I need to check up on what “friend” means over here! After I had told her that I was fresh out, she nodded her head. Then she said that she wanted to go to America with me. This bus fare was getting expensive!

Editor’s note: The picture I took looks like a new one. How did I miss out on this one?